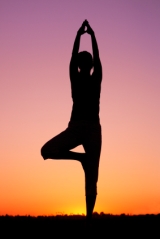 Ever since my Yogi instructor opened her new studio I’ve been determined to go. I didn’t know when, but I knew I wanted to go. After months of thinking I decided, in an impromptu moment, that I was going to attend her class on the upcoming Wednesday morning. I was kindly informed that the Wednesday morning class did not have many participants. That was more than an ideal class to start in. However, that did mean that I attended by myself rather than with my sister. My sister works full time.

The only place I go to by myself is the hairdressers, and that took me many years to do independently. I became familiar with the hairdressers as I’ve known one of them since my school days. I didn’t know exactly where the yoga studio was and I haven’t known the instructor for very long but my gut instinct was telling me to go alone. My Dad walked me towards the building but I entered it by myself.

I think that was the first time I did something like that without much supervision. Usually it takes me time, like with the hair salon. But here, I just entered the building and found the yoga studio just as I did when I went to the other studio with my sister. I had a rough idea what it looked like since I saw the photos on Facebook. It was a bit of a weird experience in more ways than one. It was the first time that I did Yoga without the company of my sister, but especially weird since I did it on my own. I didn’t feel as self-conscious as I normally would. I did get somewhat anxious before I left  home as that’s what happens every time I go out. But I was ok.

I tried to watch Non Non Biyori before I left as that always makes my mind relax. I couldn’t fully relax but it certainly took the sting out of it before I went out.

I made pleasantries when someone looked my way or someone was talking to me. I was probably a little bit stiff to tell you the truth but not so stiff that I talked like a robot. The session itself was good as well. As it was morning we did Gentle Yoga. We did balance moves so I was expecting for us to do my favourite pose, Warrior Three, but we didn’t. I was slightly gutted about that but it wasn’t that big of a deal.

I did learn something from this session… no matter how many times I do yoga poses I can never remember the names of any of them, with the exception of down facing dog and Warrior Three… I know there’s a move called the “Mermaid” but I don’t know what’s supposed to be bent and what isn’t. I will probably never memorise any of them. Haha.

I would call this day an achievement. I entered in a building, on the first go, on my own. It took me years to achieve that when I went to the Hair Salon but I did this on the first go. I’m not sure if I can get to the place by myself per se just yet but I know I can enter one by myself. So yes, all is good. =)