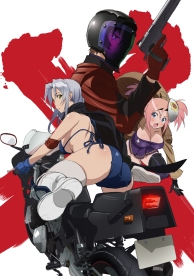 The cat’s finally out of the bag as Chikage has revealed herself to be the mysterious lady in the mask.

Haha, Inspector Tatara just doesn’t go away does he? This time he didn’t get involved in the action which I really think benefits him greatly. One of these days he’s going to get his own spin-off series from this show.

I think Mikoto did show some lack of experience, or naivety, when she attacked that wicked old man with a sword. It’s great that she’s so agile but people like that guy will always come up with contingency plans. I think she should have thought more about the situation first and be more observant of her own surroundings. There have been a few times now where she’s been surprised by people who suddenly make an appearance from the shadows.

I question Mikoto’s experience because if Sayuri was in her shoes she would be more aware of her surroundings and the wicked old man would be dead in a shot. Or, in Sayuri’s case, she would slice him faster than a shot. No pun intended.

Again, if I was Mikoto I would hop on my good leg as that way I would be faster. I somewhat sympathise with the situation of the civilians but I do think they would have been beyond redemption. For one they took part in some weird drugs and two it looked like there were going to do something rude to Mikoto before killing her. Thank goodness that Chikage got there in time. Who knows what would have happened.

I’m a bit puzzled how Mikoto was able to ride that bike. I know she can swing her hips and use her good leg but it still must be tricky to ride a bike with one leg not working.

I was sad when Chikage flew herself into the flames. It really did seem like she’s been corrupted by revenge and her “doctor” fed that revenge and used her for his own goal. I’m glad Mikoto got rid of him before he shot her. It’s interesting when he said that Chikage’s sister knew his true identity and that was the reason why he killed her with fire. The music was really sad as well. It was awesome. Well, not Chikage “dying” but the music and the scene. It was great when Arashi told Mikoto that they are not alone. I wonder if Chikage will be reborn into Dr Mochizuki’s hospital. I hope she does as Mikoto will be happy. =)

The show offers yet another puzzling question. Who is the real Ogawa Makoto? Judging by that piece of paper that Hijiri handed Inspector Tatara I seem to think he looks like Chikage’s “Doctor.” His appearance wasn’t very clear as he was covered in shadows. This Makoto chap seems to be important though, perhaps he’s going to become a catalyst? Perhaps Chikage’s “doctor” can change into different people and Makoto was one of them? So far I’m probably just grasping at straws as I don’t really know what’s going on. Haha.

Who is that green haired lady? Will we ever see the top half of her face?

I enjoyed watching this episode. =)