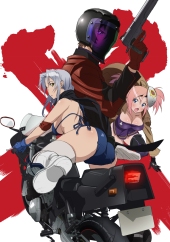 I didn’t think that there was going to be a deep connection between Arashi and Hitsugi. I just assumed that Arashi just had a deep bond with Mikoto and Oriha as they’re all part of the Ampule One group and they’re similar age. I also assumed that Arashi and Hitsugi were merely acquaintances and that was that. How wrong I was. They go way back. Back to when Arashi was in rehab and that was when they first developed their bond.

Hitsugi had a pretty sad past and it makes a lot of sense why she wore that Shinto-type mask as it hid more than just her face. It shielded away her heart and emotions. As far as I can gather she went on that rampage because she was really upset and lost sense of herself. I kind of had an idea at the beginning that Arashi was going to be the one to stop Hitsugi’s rampage, and not Yuuko, who was the one that killed and saved her.

I was a bit shocked when Hitsugi locked lips with Arashi. I was somewhat spoiled before that there was kiss involved in this episode but I never would have thought that Hitsugi would be the one that steals Arashi’s first kiss. In a weird way I do think it was a sweet moment as it felt like Hitsugi has really let her troubled past go.

I’m actually pleased that this was a Hitsugi related episode as I felt like she wasn’t really that relevant despite being super strong. I actually feel that I know more about Inspector Tatara and Suzue than I did with Hitsugi. I learned in this episode that all the long she has a beautiful bond with Arashi. It makes me intrigue as to what Arashi’s relationship is like with Miki and Yuuko.

I get the impression that Suzue is going to be kidnapped soon. In the last episode Tatara mentioned that Suzue has been working hard doing some investigation. I wonder if Suzue’s investigation involves the Syringe group. Perhaps Syringe is planning to kidnap Suzue as she knows a lot about them? Perhaps they plan to kidnap Inspector Tatara. I’m not exactly certain what’s going on in that regard. I’ll find out soon enough, I’m sure. =)