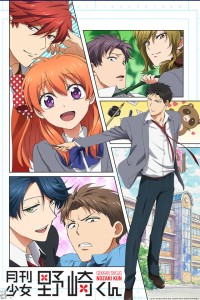 Chiyo Sakura goes to the same high school as her schoolmate and crush, Nozaki and plucks up the courage to confess to him. However, he misconstrued her as a fan and gave her an autograph instead. Chiyo later finds out that Nozaki is actually the famous shoujo manga artist penned “Sakiko Yumeno”. She shortly became his manga assistant and joined in his quirky and experimental adventures all for the sake of improving “Sakiko Yumeno”’s manga.

One day I decided to give Monthly Girls’ Nozaki-Kun a watch. This is a really fun show. There were plenty of moments that made me laugh. Most of them did involve Nozaki and Mikoshiba but as far as shocked reactions go, I liked Sakura’s the best. =D I especially liked the moment when Nozaki hijacked Kashima from her flock of fans and they chased after him whilst he was pushing Kashima on that weird trolley thing. Haha.

As a fellow illustrator I did take to this show and the character Nozaki, quickly. I can relate to Nozaki in plenty of ways. I love to take pictures of nature and objects and use them for reference for when I draw backgrounds in my pictures. I don’t take pictures of people though, not without asking permission first. The only difference is that I’m not quite as adventurous or experimental as Nozaki is. Haha. It’s good to use real life nature and people as reference but sometimes I think using your imagination can be just as good, better in some cases. =) I still enjoy Nozaki’s social experiments for manga references though. They’re my favourite parts of the show.

All the characters are really nice. I thought I wasn’t going to like Mikoshiba as I thought he was going to be cocky but it turns out that he’s super shy around people he’s not familiar with. In some ways I can relate, I used to be very silent and stiff whenever I met someone new. I’m not as bad now but sometimes I do get nervous when I meet someone new. My thoughts changed on him immediately. He’s a really cool character and I find it amusing that Nozaki based his heroine on his personality. It’s hilarious, I actually wonder if Mikoshiba realised that the heroine is based on him? It doesn’t seem like it.

I was fooled a little bit at first by Kashima’s boyish demeanour as I didn’t realise she was a girl until I saw her wearing a skirt. She’s very charming in her own unique way and I don’t see any faults in her at all. That’s why I do think Hori is harsh when he hits her in comical ways. I can see from his point of view why he does but I still think it’s unjustified.^^/

My favourite character is Sakura. I find her to be cute and very lovable as well. Her big eyes and hair bows are the first thing that I noticed about her, with a nice shade of orange as well. =) She’s always nice, even during her shocked reactions. Haha. She got to know Nozaki when she started to help him with his manga, and I think she started to like him even more and accepted all of his…unique quirks. Haha. I want to make a shout out to Yukari too. She’s a very sweet young lady and if this show ever got a sequel, I would love to see her more.

I think I got used to the charm of the show quite quickly. When the moment looks as though Nozaki is going to compliment or confess to Sakura, it turned out to be a big misunderstanding. I was a bit conflicted at these parts. In one way I felt sorry for Sakura but in another way I found it hilarious. I did like their moment in the last episode though, with the fireworks. I genuinely thought Nozaki was replying to Sakura’s confession, however, it turned out that he just misheard. Still, I was happy that Sakura was able to get some alone time with Nozaki and for me the show couldn’t have ended in a better way.

One Thumb’s-Up and a Pinky.^^/ (My Rating System) (My Anime Rankings)

I have recently watched the latest WWE Raw and the WWE Fastline pay-per-view. I’m very excited about the prospect of Sting vs Triple H at Wrestlemania. At this moment I’m getting Goosebumps every time WWE are talk about Sting. I must admit and say that I always had doubt that Sting would ever go to WWE. Now he has. I’m very happy. =) My favourite match of the night was Daniel Bryan vs Roman Reigns. I actually do think that was my favourite Roman Reigns’ match.

Oh. I also learned that Inori Minase is going to voice Hestia from…inhaling…Is It Wrong to Try to Pick up Girls in a Dungeon? Phew, that’s always difficult to say in one breath. Haha… Anyhow, I’m excited about this. She was the same voice actor who voiced Mirai Nazukari from Locodol. I liked her voice for Mirai and I anticipate that she’s going to give Hestia a really charming voice. She’s very innocent and endearing when she gets excited but mature when she needs to be. I think she’ll do a very good job indeed. It makes me even more excited for the anime. =)

[1] The target audience of this manga is boys. Shounen means boy in Japanese.