To the average eye Hanzou[1] National Academy is a prestigious school. However, unbeknown to the average student this school educates five special female students who are training and learning to be ninjas. Asuka and her friends represent the good ninja and strive to bring justice and peace to Japan. However, Hanzou’s rival ninja school, Hebi[2], have opposite views on this matter. How will Asuka and her friends handle Hebi’s slithering advances?

I was slightly hyped up for this when I saw the advertisements for the game and after I played the game. It’s one of my favourite games for the Nintendo 3DS. If I enjoyed the game then I would probably enjoy the manga as well. So, I’ve acquired myself the first volume of Senran Kagura.

What I enjoyed the most here is the action and all the girls beating each other to a bloody pulp. Haha. Whilst it’s no secret that there’s heavy fanservice in this manga I do think there is a hidden agenda to this manga. As well as going through physical battles with one another, each character is going through personal battles as well. Katsuragi desires a strong opponent to push her to the limits, Hibari is battling her low self-confidence in her abilities as a ninja and Ikaruga has family issues.

I like all the characters. Katsuragi is your perverted girl who acts like a lecherous old man. Despite her in-your-face attitude she is someone you can depend on and will get serious if she needs to. She also seems to have a bit of a sad history that involves her dog. She also has a kickass fighting style that involves a lot of upside down helicopter kicks. I tend to do very well when I play as Katsuragi in the game. Haha.

Hibari is a very sweet girl, and like Hinata from the Naruto series she isn’t really cut out to be a ninja due to her kind personality. However, much like Hinata from the Naruto series she is determined to hone her skills as a ninja and go beyond. I think that she might be holding herself back because deep down it isn’t in her nature to hurt people. Ironically, I’m not sure if it’s because of her alias with the Rabbit, but she seems to have very heightened senses.

Then we have Yagyuu, who is very cool and very strong. Probably a little bit too over-protective of Hibari but she really rocks that eye-patch. Was she secretly assigned to look over Hibari? Or, is Yagyuu looking over Hibari of her own choice? Asuka is a nice girl, but I would like to learn more about her. It’s funny and quirky that all the girls hide their scrolls in their chests and up their skirts. How does Katsuragi manage to hold the scroll in her skirt in the first? Actually. It would be best that I remain ignorant, so I will withdraw my own question. XD

Finally, we have Ikaruga, the mature and big sister type character. She is my favourite character. Whilst she is mature and dependable I do get the sense that she might be a little bit naïve, almost to the point where she isn’t really that street wise. Perhaps it’s because she was adopted into her family and had a hard time growing up. I also get the sense that she often wears her heart on her sleeve. She’s mature but she’s also very cute when it comes to expressing her emotions.

The students of Hebi, or at least certain ones, invade Hanzou and battle certain students like Asuka and Katsuragi. So far, it seems like it’s a bit one-sided. Kiryuu’s choice of words to his students was interesting. I think his mind was a bit conflicted. I think he was about to praise the girls after they survived Hebi’s onslaught, but thought otherwise. In his mind he probably thought that reassuring them might do more harm than good. So, he decided to give them a bit of tough love treatment. Evidently, it seems like it had the desired effect judging by their reactions.

There weren’t really extras at the end, just comments by Mori, the PR and in charge of advertisement and Kinichiro Takaki. There is a postscript and a page describing Yagyuu’s daily activities. That’s worth a read in my opinion. =)

Despite the heavy fanservice I do think we have a potential plot on our hands. Haruka appears to be interested in Hibari. It’ll be interesting to see why. When you look at the ‘evil people’ you would think that they are literally evil. However, I think in this case they act pretty normal and some of their reactions to situations are rather comedic, especially Haruka’s.

I must say that it’s pretty much what I’ve expected. It’s just full of girls beating the snot out of each other but with the juicy bonus of exposing skin. What were the odds of that happening? Haha. It’s pretty much like the game but this is the 2D version of the 3D (obviously) haha. I’ve enjoyed this story a lot more than I thought I would but at this moment in time I do think I prefer the game over the manga. Probably because the game has a lot more story material then the manga. I do think that is to be expected though.

One-Thumb’s Up. (My Rating System) 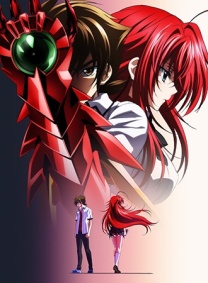 The airing date for High School DxD 3rd season has been confirmed. It’s going to air in April 2015 and its official title is “High School DxD BorN”. Many theories come to mind why the word ‘BorN’ is present but for now I’ll keep those thoughts reserved. I’m just delighted that we finally have a confirmation date. Hopefully Crunchyroll will air this online. 🙂

Monster Musume Volume 5 is also number one in the New York Times for the second week in a row. I can’t express how happy I am to see MonMusu doing so well in the western market.

I also think that SevenSeas is slowly becoming my favourite manga publishers. They’re practically licensing all the manga that I like and they interact with the fans via Tumblr and Twitter. =) 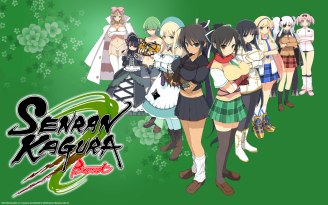 It’s quite ironic since I never planned to review this manga at all, but all of a sudden I just felt like reading this. Reading Senran Kagura has suddenly tempted me to play the Senran Kagura Burst game.

I really enjoy that game but I gave myself a break as I’m a bit stuck. I’m doing very well playing as Ikaruga and Katsuragi and doing fairly well with Asuka. However, I must say that I’m really struggling getting past the first few hurdles with Hibari. I could go on further with Ikaruga but I want to try and have Hibari catch up and reach her level. At this moment in time thought it’s proving to be difficult. Haha.

On that note, I’m going to play Senran Kagura Burst. I’ll see you folks around. =)
Sayonara.^^/

[1] Hanzou Academy is named after the famous samurai and ninja of the Sengoku era, Hattori Hanzō. He was credited to saving the life of Tokugawa Ieyasu and assisted him to become the ruler of united Japan.

[2] Hebi is Japanese translation for “snake”.

[3] This manga contains risqué and sexy moments or lecherous characters.

[4] The target audience of this manga is towards an older gentleman with the age range from 18 to 30.