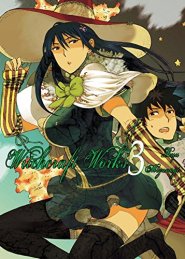 The first stage of Honoka’s seal, the “white stuff” has been broken and has been unleashed in the form of a powerful maiden who goes by the name “Evermillion”. What will happen now that Evermillion has surfaced? Can Honoka keep Kazane in the dark or will she be able to sniff him out before it’s too late?

My oh my, that Evermillion sure is powerful, to be able to destroy a building and cause a landslide in a matter of seconds. I wouldn’t be surprised if she is actually the most powerful character in the series, perhaps more so then Kazane herself. Kazane’s reaction was funny. I seriously would not want to get on the wrong side of her. I like Evermillion already. My initial thoughts were that she looked and acted like a wicked witch from a fairy tale. However, up until now this hasn’t been the case. I especially like the way she told Honoka off as he kept on doubting Kagari’s ability, which caused her to be petrified by Medusa.

Those kissing on the cheek scenes were lovely and my favourite part of this volume.

I did cringe somewhat when Kagari made Takamiya the School Council President by abusing her own authority as “princess”. I did laugh but I cringed through embarrassment as I felt empathy for Takamiya. If I was in his position, I wouldn’t know where to put my face. Haha. Touko was the only one in the council team that didn’t show any animosity towards Honoka when he was made the President. I actually thought that Ayaka was going to kick her out of the team as I got the impression that she didn’t like Touko very much. I’m glad she stayed part of the council.

Oh boy, Kasumi… she’s very brave to try and take out Ayaka. I think the tranquiliser would have worked if Ayaka hadn’t had a connection with Honoka. I do wonder about Kasumi’s obsession with her brother though, it’s quite extreme. I didn’t like the way she shouted at her mum though. Granted, the mum’s sensitivity is cute but I don’t think shouting at her was very nice. Honoka was right to scold her.

I laughed hardest when Ayaka spotted the teddy bear carrying a tied up Honoka. Something like that should have been more dramatic with sound effects, but yet, it felt very casual. To me, that’s what makes it more hilarious. What I especially found funny was at the end page when Ayaka bribed Touko to hand over her seat as vice president.

Medusa is quite an ok character, she seems fairly laid back. Probably a little bit too laid back at times. Her underlings, Tanpopo and co, are severely weak. I don’t even know why they bother to get involved as you just know they’re going to lose. Ayaka doesn’t even see them as threats, thus choosing to ignore them, even when they went out of their room. I don’t even see them as villains, even if they are tower witches.

…oh dear. Kazane has finally discovered that Medusa and her underlings are living in Honoka’s house.

I’m really looking forward to the fight of Ayaka with Medusa’s form to fight against Kazane. I reckon that’s going to be a clash of two power houses right there. I also get quite engaged with Kazane’s intensity, it’s like she’s roaring when she shouts. She’s the type who wears her heart on her sleeve and is very expressive, quite the opposite of her daughter in fact. Anyway, I think I’m right in thinking that Medusa indirectly blackmailed Ayaka into combining their bodies together…

My reason is that Medusa knows that the first stage of Honoka’s powers [Evermillion] has been released. If Kazane finds out then that means that Honoka could be sealed and Ayaka wouldn’t want that, and I don’t think Honoka would either. Plus, Medusa, being the tower witch, will probably grass Honoka up since she actually witnessed Evermillion’s appearance. So, in order to keep Medusa quiet, Ayaka probably offered herself as Medusa’s vessel. I wonder what’s going to happen there. It’s going to be good, whatever may happen next.

I’m really enjoying the manga version of Witchcraft Works; I especially like the back pages and facts about the story. I’m not sure if I prefer the anime version or manga version at this moment, I just think that they both have their own charm. During Evermillion’s appearance I pictured her theme music that was aired in the anime. I find it really catchy and exciting; it gives you the vibe that a strong character has made his/her presence known. It suits Evermillion very well. =)

[1] The target audience of this manga is towards an older gentleman with the age range from 18 to 30. 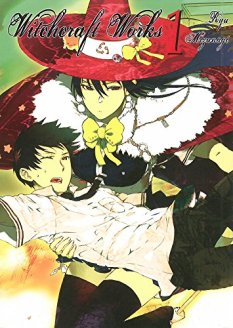 It’s easy for me to get carried away with this review since I’ve actually seen the anime and have bought the official soundtrack. However, I will restrain myself and focus primarily on this book… promise! =)

Honoka Takamiya is a student of Tougetsu Academy who is docile, has no special talents and is severely anti-social. However, since that day, a new world opened up to him that he never knew existed. Since then his body had become a target and it is up to Akaya, the school’s idol, to protect his life at all costs. If you dare cross her path, you better prepare yourself to be burned to cinders!

For some reason I have quite affection towards girls who are emotionless and I believe they’re affectionately known as Kuudere.[3] XD I think they’re cute because they show their affection through their actions rather than through facial expressions. There’s always a charming mystery about those types of girls too and Ayaka is no different. Her personality blends well with her looks and her kickass fire abilities. It’s a nice touch that she’s invincible. Well, I’m just assuming that she’s invincible at this point as she is clearly hard to kill. Witch or not no one should be able to survive those spike stabs and come out unscathed.

But, I then question… how did she get those bite marks? Honoka was bitten in the neck but somehow she was able to transfer Honoka’s own injuries to herself… Perhaps she did it through magic (since she’s a witch and all) or, maybe, they have a connection that hasn’t been revealed yet? Why is she assigned to protect Honoka and his “white stuff”? Could he be a witch? At this point I can’t see how that can be possible, it seems as though it’s just the ladies that have the power. In theory, if Honoka does have powers you would think that he would be a wizard.

I immediately like Honoka and Ayaka’s contrast in their relationship. I feel like somehow Honoka is accustomed to the company of females. There’s no evidence in this matter, it’s just my own hunch. He’s becoming quickly familiar with Ayaka, even if he is a little bewildered by her actions. Haha. I especially like the contrasting relationship on how the girl (Ayaka) is protecting the boy (Honoka). I also like it how Ayaka literally dwarfs Honoka. I do like the look of small guys and tall girls, it’s oddly fascinating. Haha. However, despite this contrasting relationship, this doesn’t deter Ayaka’s femininity. In fact, on the odd occasion she would emit a field of flowers. =)

What is this “white stuff” that Honoka has? Is it a powerful tool? Is it powerful magic? The tower witches are after it, so it must be some sort of powerful magic. I don’t feel too worried for Honoka though, by what I’ve seen all the bad witches seem to be completely useless. It goes to the point where I can’t take them seriously. XD Are the tower witches weak or is Ayaka too strong? It’s probably a mixture of both.

I actually don’t see Tanpopo and her gang as baddies, but more like tools. I think they’re underlines of some villain mastermind and they don’t necessarily mean to be bad. I just see them too meek and funny to consider them as villains. I see them as wannabe baddies, like Sideshow Bob from the Simpsons.

I find this to be a very intriguing story so far. It has magic, tall girls and a lot of humour. So far the humour is coming from all the witches, mostly Tanpopo and Ayaka. In some ways it’s hard to tell when Ayaka is joking or being serious because she is incapable of showing emotion through her face. There are occasional glares and twitches from her eyes though, as illustrated when Touko greeted her warmly. Ayaka requited the greeting with a cold response. Haha. I wonder why Ayaka was hostile towards her.

Honoka is a nice dude to the point where he is a borderline pacifist. He doesn’t defend himself when he gets beaten up and won’t attack either. He seems to be a bit too dependent on Ayaka at this point. I get the impression that he’s used to getting rough ends of treatment, both verbally and physically. I do think that with the right tutelage, as he became Ayaka’s apprentice, he will learn to defend himself.^^/

I do like this style of art. It is somewhat similar to my own in the respect of body proportion. I think it’s very good to compare other art styles as long as you don’t take yourself too seriously. I like the colour themes and how he shades background characters. Looking at art makes me wonder if perhaps I’m too critical of my own work. I will always strive to improve my own illustration style. =)

We have a lot of very interesting facts which includes a certain mention of a girl. The author revealed that he was going to call the girl Pikachu but didn’t since that would cause a lot of trouble. Haha.

What I found most interesting was Honoka. It appears that he was originally supposed to be a girl and that he and Ayaka were going to have a Yuri[4] relationship. It appears that now the author has deemed it fit to change Honoka’s gender to a boy. It actually does make sense to me as due to his personality and quirks his feminine side was more prominent then his masculine side. Plus, Ayaka referred to him as her “princess” even though he’s a dude. Haha. It’s kind of sweet in a way. That doesn’t make him any less of a boy though. =)

I really like the unique relationship and the role reversal between Ayaka and Honoka. I think it’s a sweet yet slightly complicated relationship. I say relationship but nothing romantic has blossomed between them… yet. 😉 The illustrations are eye-catching (no pun intended) and it makes me want to read more. Why is Ayaka so mysterious? Why are the tower witches after Honoka’s “white stuff”? I’m probing many personal questions that I look forward to being answered in the future volumes to come. 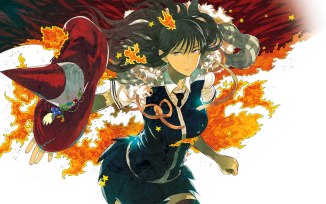 I’m looking outside of my window now and, even though the sun is up it’s actually raining pretty hard… I enjoy contrasting weathers like this. =)

What do you think of the header? I somehow had the urge to do it. If I gave it some more time then I could have made it better. But, I think it’s as good as it is and I’m very pleased with it. =)

Thanks for reading.
Sayonara.^^/

[1] The target audience of this manga is towards an older gentleman with the age range from 18 to 30.

[3] Kuuderes are cold and emotionless, but they slowly soften up to their love interest. Ayaka is more on the emotionless side and is not really cold. She is hostile to her enemies though.

[4] A lesbian relationship in anime or manga.